Be Nice to the Sound Guy

Saturday's gig arrived before I knew it. It was my and Chad Hinman's first gig with Thin Rail.

I am admitting rather openly - except for typing in the address for the event and updating it on this website - I had no idea the location we were playing. Imagine my excitement when I realized the building! If you know Southeast Portland, but you haven't been to an event at the Hawthorne Theatre, you will recognize the building on the corner of 39th and Hawthorne. It was once a Masonic Temple built in the early 1920s, and had many purposes over the years,.. more here.

Though the show started at 8pm, we were asked to arrive at 5:30pm. Not all of us were thrilled about that. We set up fairly fast and waited for some time for sound check. Damon the sound guy was nice, a straight talker, and busy I guessed, since he was in and out of the space preparing for open. I also guessed he wasn't a man to upset, so I was patient for possibly the first time in my life. I have learned from past experiences that it is always, always, always a bad idea to not be courteous to the sound man.

The wait gave me time to take some fabulous Instagram worthy photographs of the building. Once I got done photographing the building I found Damon and asked him if he would take a photo with me. He obliged. I am very certain the 'younger than me' staff at the Hawthorne Theatre consider me somewhat a dork.

Thank God for sound check. Once we started playing less than an hour before the show, I literally could make nothing out of my microphone. So Chad went to move some dials on the board, and Damon came from the other side of the venue like a cheetah and reminded him something like, "Don't ever touch the board again under any circumstances" and then added the sound was maxed. So I asked Damon to turn everything down "cause I promise I am not that picky about sound, but I can't hear $#^&!", and then Damon found some magic dial and I could instantly hear.

It isn't often you just GEL on stage. Sound is a big component. You have nights you can't hear and it makes it hard to sync together. Saturday had a bit of magic. We could hear. The rhythm section synced. The tempos were perfect. The harmonies locked. We had a lot of fun too. Wow! That felt great.

Damon might be a great sound guy, AND I adore the boys in this band. It was so much fun to be on stage with them. Let's do it again soon shall we? 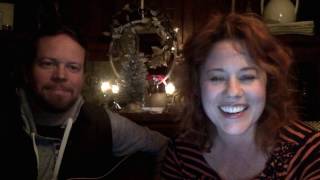 Be Nice to the Sound Guy